NEGATIVE IONS- get out and see the sunshine. 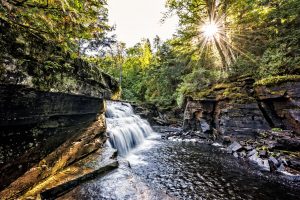 Basically – get outside in nature. Studies suggest that air with an overall depleted ion count (positive and negative) or an abundance of positive ions and a lack of negative ions, does not promote a healthy environment and should be treated as polluted air.

1. Chemicals in your home: Try to be mindful about how many you’re bringing in. Use natural cosmetics and cleaning products, and try to buy your food as chemical-free as you can afford or have access to. (Our indoor environment is much more toxic than outdoors, and that’s saying something.)

2. Where: Negative ions are abundant in nature, especially around waterfalls, in the ocean, at the beach and after a storm. They are widespread in mountains and forests.

3. Why: They release endorphins, our feel-good hormones. Indoor air that has a higher concentration of positive ions can lead to ‘Sick Building Syndrome’ or even symptoms usually associated with ‘Seasonal Affective Disorder’.

4. How: The most obvious way is to get outside into nature. Bush walking, camping, finding a beautiful waterhole and/or waterfall to hang out in, or even just walk around your neighbourhood, assuming the pollution isn’t terrible. Have your bare feet touch the earth as often as you can (this is called ‘earthing’), gardening is wonderful, get in the ocean and wade, swim or surf. Internally, get some indoor plants, and an ioniser/dehumidifier/diffuser is another good way to absorb the positive ions. I have one that I can add essential oils to it and it also has a soft night light, so it’s great to leave in the bathroom or kids room overnight. ‘Salt lamps’ are great way to encourage negative ions in your home and/or workplace. I have a few scattered around my place, but be warned – they tend to melt a little in humidity, so you’ll need a plate under them, or get an electric one.

The degree to which negative ions contribute to overall wellbeing and health is scientifically proven. They help to-

The most important benefit of negative ions is that they clear the air of airborne allergens such as pollen, mould spores, bacteria and viruses. Besides that they also clear the air of dust, pet dander and cigarette smoke. Negative ions perform this function by attaching themselves to positively charged particles in large numbers and negatively charging those particles. As a result, these viruses, bacteria and pollen spores become too heavy to remain airborne and are thus prevented from entering your breathing passage where they can make you sick. In other words, negative ions form a protective circle around you.‪